Noted comic-book critic Ariel Dorfman, co-author of How to Read Donald Duck, has weighed in on the Action Comics #900 controversy. 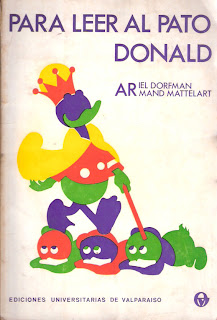 In an article written for Spanish newspaper El País, he ties Superman's recent announcement of his intention to renounce his U.S. citizenship with recent events regarding Barack Obama and Osama Bin Laden. A brief summary for non-Spanish speakers:
Dorfman summarizes for his readers the Superman backup story from Action Comics #900 (in which the Kansas-raised character turns his back on his adopted country) as well as the outraged reactions from conservative U.S. bloggers, mentioning that this is being seen by some as further sign of the decadence of the U.S.A.
Even though Obama is more of a Spider-Man fan, Dorfman believes that somebody must have drawn this story to the U.S. president's attention. Realizing the danger of being accused by Republicans of his having "lost" Superman to anti-U.S. interests (in the same way Cuba and Vietnam were lost), Obama must have decided to kill Osama Bin Laden in order to show everybody that America didn't need superpowered beings to defend itself.
Dorfman goes on to point that Obama still had one further point to address: the doubts regarding the accusations that he, like Superman, was an illegal alien, brought to the U.S. by his Kansas-born mother (noting the "kafkanian letter K" coincidence of the initial letter shared by Kenya, Krypton, and Kansas). By providing proof of his birth certificate, he proved that he was a legitimate president, which in turn allowed him to eliminate the United States' number one enemy.
The article ends with Dorfman's suggestion that Obama and Superman join forces in order to remove all U.S. troops from Afghanistan. Dorfman concludes:
"It would be nice to read this in the next adventures of the Man of Steel, it would be encouraging to have Obama and Superman -- both with their origins in Kansas, both belittled for being 'aliens' -- collaborate in creating at least a small oasis of peace in a world in which unfortunately both truth and justice are now in short supply."
DC's blog in the meantime is amusing for two things: it's showing me on the left side of the screen an ad for a Thor computer game, and it continues to be remarkably free of any mention of the controversial Action Comics #900 backup story.
Posted by Rodrigo Baeza at 5:56 PM