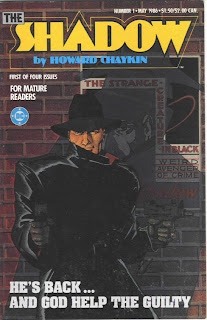 About a week ago, Warren Ellis casually mentioned that he'd been "Writing a blurb for the back cover of the forthcoming reprint of Howard Chaykin’s SHADOW comics series."

Today Dynamite Entertainment has made the official announcement, releasing some preview artwork along with an impressive amount of blurbs from notable comics industry figures. But one of the things that came to mind when I first read Ellis's blog post was the somewhat different reaction from people back in 1986, when Chaykin's The Shadow mini-series originally was published.

This is something that Matt Fraction maybe alludes to, when he writes: "IT’S TIME TO GET OFFENDED AGAIN." I'm thinking of Harlan Ellison's particularly memorable reaction. 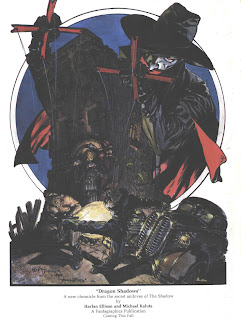 Ellison is a big fan of the character in its original radio and pulp incarnations, even planning at some time (a few years before Chaykin did his version) to write a graphic novel featuring The Shadow. Michael Kaluta was going to be the artist (sample image above), with Fantagraphics publishing the book. For various reasons the graphic novel was never done, and the fact that Ellison and Fantagraphics were involved at the time in a years-long lawsuit against Michael Fleisher probably didn't help.

Anyhow, issue #108 of The Comics Journal includes a report of a radio interview with Frank Miller that Harlan Ellison conducted on March 14, 1986. The interview is mostly about Miller's Dark Knight, which Ellison praises and holds up as an example of updating an old character "in more adult terms". Ellison contrasts Miller's work with what he describes as the:

"loathsome Shadow revival that is being done by Howard Chaykin, which in my view is an absolute obscenity".

Adding later that Chaykin's series was:

Ellison also criticized what he described as "the starfucker syndrome", in which:

"the comics companies are giving total auteur freedom to certain people to create projects like the Dark Knight project, and yet some of them are turning out very, very sour. Some of them are going very, very wrong."

Issue #111 of the Journal has reports of three more Hour 25 radio shows from 1986, in which Ellison interviewed people such as Marv Wolfman, Steve Gerber, and Frank Miller. There is a quite interesting discussion about John Byrne's Man of Steel which you can read following the link, and also more interesting Ellison comments about Chaykin's Shadow:

Ellison referred to the Shadow as "beloved to people of my generation," but found Howard Chaykin's interpretation "vile and detestable." According to Ellison, Chaykin's Shadow is a "sexist pig who uses people, sacrifices people, hasn't one grain of decency in him. He's a psychopathic killer."

Ellison said he objected to Chaykin's killing off original Shadow characters and sidekicks. "At what point do we say, 'You're mucking with our myths'?" he asked.

(During the eighties Ellison frequently wrote and talked in public appearances about then-current comics, even writing an article for Playboy magazine in which he tried to summarize to a general audience how much comics had changed during the decade. I'm just mentioning this as an excuse to link to Gary Groth's 1989 editorial in which Groth responds to this article, denouncing Ellison's "intellectual charlatanism.")

Ellison is known for his ability to nurse a grudge, and here's one more example. In 2003, Michael Chabon edited McSweeney's Mammoth Treasury of Thrilling Tales, a collection of stories by various writers, with each story carrying an accompanying illustration by Howard Chaykin (who did his usual exemplary work). Well, each story save one. Here's a note Harlan Ellison posted on his forum at the time:

The reason my story in McSweeney's doesn't have an accompanying piece of art by Howard Chaykin -- as do the other stories in the issue -- is because I didn't want one. I wanted the marvelous color oil painting by my friend (and frequent Ellison-fiction illustrator) the phenomenal California artist, Kent Bash, that he did for this story-idea when I came up with it for the final issue of HARLAN ELLISON'S DREAM CORRIDOR. The illustration had to be done in black&white, so you cannot see how spectacular it is; but you'll see it when I get around to putting together that issue of DREAM CORRIDOR. What DOES piss me off, however, is among all the typos and amateur fuckups in McSweeney's #10 (which is incorrectly identified
as #11 on the table of contents) are two unacceptable, egregious demonstrations of sophomoric editing and amateur proofreading:

1) They dropped all the copyright notices, thereby forcing me and other writers to have to get letters of omission so we can register the stories with the Library of Congress;

2) The table of contents announces "all art in this issue by Howard Chaykin." Well, no, in fact; Kent Bash is an internationally-acclaimed artist, and however good or bad Howard Chaykin's little b&w cameos may be for McSweeney's purposes, the Bash painting is not comic-book art, it is a full visual interpretation of one of the punchlines of the story, and failure to acknowledge Kent REALLY and TRULY angers me.

I was a bit surprised when I saw that long list of endorsement quotes from creators, because clearly a generational shift has taken place. I must be on the wrong side of it. I have to admit, my own reaction to the series is a lot closer to Ellison than it is to Bendis or Fraction. There are some clever bits in it -- though I much preferred the same ideas when Chaykin did them in American Flagg -- but mainly it came across as smug and mean-spirited.

Why can't they reprint "The Shadow Strikes"? It was miles better than the drek that was the Chaykin series, and the parody of a series that followed.

Hope they follow t up with the Helfer Series.