A handful of original art pages (along with some cover proofs and stats) from comics published by Marvel between 1970 and 1972 are currently up for auction, featuring the work of artists such as Jack Kirby, Bill Everett, Gene Colan, and John Buscema.

The interesting thing about them is their provenance: this is the first time they've been offered for sale, since they come from the collection of Aaron Goodman, grandson of Marvel Comics founder Martin Goodman.


All these pages are from a time in there was no policy of returning original art to its creators. Pages would be stored by the publisher, but they could be also be given away to visitors to the office (such as Aaron Goodman), or in some cases stolen by fans-turned-pros or people who knew there were people interested in buying this art.

Jim McLauchlin has an article up at Newsarama about the original art to Amazing Fantasy #15 (as well as Steve Ditko's original art to Strange Tales #117, which recently turned up in an auction). In it he cites lawyer Ronald Bienstock, who states:

“Clearly if you have an old piece of Spider-Man art, you cannot reproduce it and you do not have the copyright, and that’s an issue that people sometimes get confused on,” he says. “But on that physical piece, my conjecture is that they attached no value to it based on the set of facts you described. If you didn’t give it a value, you can’t come back at a certain point and say ‘Now this tremendous value belongs to me.’ If you gave it away or threw in in the dumpster…that’s gone. It’s no longer yours.”


I'm currently reading the correspondence between H. P. Lovecraft and Catherine L. Moore. In a 1936 letter she writes:

Incidently I am a connois[s]eur of comics, or do I mean connoiseuse? anyhow, [sic] have found in the funnies subtleties both of drawing and of dialect which seem to me supremely funny. The "Snuffy Smith" series, taking place in the feud-country of Tennessee or thereabouts is full of the most delightfully apt colloquialisms. Consider the bearded ancient who cocked an eye aloft at a lowering sky and remarked, "Hit's a-clabberin' up fer a shower". And "do-less" is such a descriptive adjective. And "Time's a-wastin'" has become a by-word at our house. The artist must have spent quite a bit of time and effort collecting such gems of dialect -- must be authentic, for no one could make up so many such apt ones. And nowhere but in the comic strips and funnies does one encounter such deft subtlety in delineating moods and expressions with a few strokes. The grotesque little characters can assume marvelously apt attitudes -- bewilderment, despair, speechless confusion -- all achieved with a few dots and lines. I think if the funnies could be preserved for a few thousand years and shown to a new civilization, they'd convey in fewer words and pictures, and such more accurately than anything else could do, the daily life of our present age. Certain selected funnies, of course -- one in particular that I have in mind shows with exquisite aptness the ridiculous things that happen to all of us -- the day when everything goes wrong, the time when the phone rings with an important message and you run downstairs losing your slippers in the process, stumble over chairs, trip on rugs, and reach the phone to find the baby has just hung it up. And then there's the dry humor of "Skippy", the timeliness of "Mr. and Mrs.", and the vividly familiar dilemmas of "Out Our Way" -- certainly the funnies have progressed a long way since the "Bang-Powie-Plop" era.

Posted by Rodrigo Baeza at 2:12 PM No comments:

Ben Katchor participated on an online video chat on April 1st, talking about his latest book, Hand-Drying in America.

Posted by Rodrigo Baeza at 10:27 AM No comments:

Very sad news regarding Spain Rodriguez's passing. I discovered his work through reference books about comics (most probably Toutain's Historia de los Comics), at an age in which I wasn't supposed to read underground comics. Nevertheless, being a big fan of Harvey Kurtzman's MAD, it wasn't a big surprise that I ended up being an enthusiastic reader of underground comics as well, most definitely including Spain Rodriguez's work.

I was able to track down Spain's work thanks to Fantagraphics' reprint volumes (part of their quixotic attempt to reprint the work of several underground comix artists during a period in which there wasn't a bookstore market for comics like these): 1989's Trashman Lives! and 1994's My True Story, a book that collected his autobiographical and non-fiction stories, a body of work that probably showed Spain at his best.

The following is just a minor footnote in his career, but it is a somewhat unexpected example of Spain's influence and may be of interest for those who (like me) enjoy comics trivia.

A few months ago comics writer Pat Mills started posting on his blog a series of articles about the creation of Judge Dredd. Back in September he wrote the following:


With the prospect of a better and fairer future ahead of us, John [Wagner] and I enthusiastically talked about his idea for a cop of the future. We were both impressed by a one page American underground strip called Mannix that was reprinted in Comix: A History of Comic Books in America, by Les Daniels. It featured a ruthless cop who shoots a fleeing criminal in the back and was obviously satirising dirty cops some years before the Clint Eastwood films appeared. We were also impressed by a story in American magazine Weird and Eerie where a science fiction cop pursues a criminal through a futuristic city and executes him. We then discover the perp’s crime – he was carrying a copy of a sick and seditious magazine, Weird and Eerie!


We also rated science fiction movies like Fahrenheit 451 where cops burn books, Logan’s Run where cops shoot old people, Death Race 2000 where crazy drivers run over pedestrians in legalised death races, and Rollerball where death is turned into a sport. Against this background, John suggested to me, “What about a future New York cop who executes people for the smallest infraction of the law, such as dropping litter?”

The comic Pat Mills is referring to isn't Mannix, but Manning, Spain's violent and energetically-drawn parody of cop movies. Here is the page (scanned from Les Daniels's Comix) that impressed Wagner and Mills and ended up being one of the inspirations for Judge Dredd (click on the image to see it at a larger size): 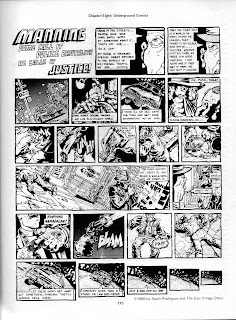 
Day 1, Keynote: A Conversation with Chris Claremont and Louise Simonson

Posted by Rodrigo Baeza at 12:51 PM No comments:

My previous post about Artie Simek ended with a look at some "Davy Crockett" pages drawn by Jack Kirby that had been scanned from a copy of Marvelman #231. These pages didn't seem to have been previously published in an American comic-book, so I speculated that they could have been either done for the U.K. market (after the Atlas implosion), or that they could have been inventory stories left from the "Davy Crockett" series that Kirby did for Harvey's Western Tales between 1955 and 1956.

The answer is: none of the above.

Allow me to digress a little. During the mid-1950's everybody was doing "Davy Crockett" comics. There was the aforementioned Kirby series over at Western Tales; Charlton had its own Davy Crockett comic between 1955 and 1957 and also featured the character in a series named Wild Frontier; Avon released a Fighting Davy Crockett one-shot in 1955; the character appeared in DC's Frontier Fighters comic; and Dell published several Davy Crockett comics based on Disney's TV version.

On June 20, 1955, writer France "Ed" Herron and artist Jim McArdle began a new "Davy Crockett" newspaper strip (the ad at left and the first strip below are reproduced from the Spokane Daily Chronicle, courtesy of Google's newspaper archives). Herron had worked on and off with Kirby since the early 1940's, and is credited with co-creating the Red Skull, among other characters.

Back to the Kirby-drawn "Davy Crockett" pages from Marvelman #231. Dave Gibbons posted a comment on this blog noting that the pages looked like re-formatted newspaper strips. All the pages posted by Matt Gore have a white space at the top left corner every three panels, which is where the title of the strip would have appeared in a newspaper. So there was an extra clue.

Then, in a discussion over at the Grand Comics Database's mailing list about the provenance of these Kirby pages, someone pointed out an article from early this year which contained the solution to the mystery. On March 2012, Jean Depelley wrote an article at BDZoom.com that explained where these Kirby pages came from.

It turns out these Kirby pages were also published in France (a decade after their U.K. appearance) in Zoom #15 (October 1968).


In his article, Jean Depelley describes the discovery of this story by French fans, their failed attempts to trace it to an American comic-book publication (they also considered the stories in Western Tales as a possibility) and their arrival to a conclusion: that these are newspaper strips Jack Kirby ghosted for Ed Herron's Davy Crockett strip during a transitional period in early 1957 (which would apparently date them before the Atlas Implosion).

The evidence is in the BDzoom.com article: the "Columbia Features Syndicate" copyright notice, the "Herron/McArdle" signature in a later strip, and the fact that the continuity of the Kirby strips flows naturally from previous episodes drawn by another artist (showing that Kirby's pages weren't a stand-alone work, he was following somebody else's story). So that's a minor mystery solved. There are probably other fans who were aware of the fact that Kirby ghosted these "Davy Crockett" strips (it's unlikely that nobody else has noticed this fact in the 55 years since the strips' original appearance), but Depelley's article is the only place I've seen this documented.

One final digression: I remembered Depelley's name from his appearances in the Jack Kirby Collector, usually in the letter columns but also as an occasional article writer. And as revealed by Tom Scioli in his Angouleme diary early this year, Depelley is also working on a Jack Kirby biography focusing on his war years. As Scioli describes it: "He’s put together a timeline of when and where Kirby was during the war, based on Jean’s interviews with the children of the soldiers Jack was stationed with. He’s visited the sites of various battles that Kirby had been involved in."

Sounds like this could be a really good book. Depelley has written a series of "Adventures of Private Kirby" posts over at BDzoom.com which show some of his research. I haven't read them all yet, but look forward to doing so soon.