The latest Previews catalog shows how some publishers are adapting in order to meet the new minimum orders required by Diamond. As pointed out in various places, Buenaventura Press for example is offering a "Comics Revival Previews Excluse 3-Pak", a $11.95 shrink-wrapped package containing Eric Haven's The Aviatrix, Ted May's Injury #3, and Lisa Hanawalt's I Want You (comics that if published separately probably wouldn't have met Diamond's minimums). 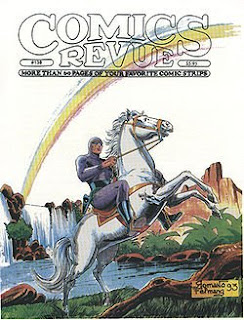 Other publishers are taking similar measures. When I was reaching the end of the solicitations I noticed something: Comics Revue wasn't listed. Comics Revue is a monthly 64-page anthology of classic newspaper strips that has been published since 1983. Currently in its 277th (!) issue, the magazine is something that (in its current format) could only survive in the direct market. I admit I was worried when I noticed there was no listing for the magazine in the latest Previews catalog, so I decided to ask publisher Rick Norwood about the situation. His response was:

Diamond will (knock wood) still carry Comics Revue. But to meet the Diamond minimum order on each issue, I have to publish six double issues each year instead of twelve single issues. So, no issue in September. First double issue in October. On the other hand, to comply with Diamond's demands, I had to raise the cover price to $16 for each double issue. If you subscribe, you can lock in the old price -- $45 for one year, $90 for two years.

I explain all this in the editorial in CR 278, on its way to your dealer now.

The magazine currently reprints strips such as Gasoline Alley (the Dick Moores strips), Krazy Kat dailies, Harold Gray's Little Orphan Annie, Roy Crane's Buz Sawyer, Milton Caniff's Steve Canyon, Dan Barry's Flash Gordon, and V.T. Hamlin's Alley Oop, among others. Comics Revue was an essential part of my monthly comics reading when I started buying it regularly, in the dark mid-to-late 1990's period in which few publishers were issuing book collections of newspaper strips. And even in today's current bonanza of reprint projects, Comics Revue is still worth reading for its selection of strips and its attention to detail.

I know there are a lot of people out there who would love Comics Revue if they knew it exists, but it is hard to get the message out. I was at the recent New York Comics Con, and people I talked to about Comics Revue would say things like -- my comics dealer said it was no longer published or -- my comics dealer says he can't order it from Diamond.

[T]he new format will have eight pages of color, including The Phantom in Return of the Sky Band. Also starting in October, the first English language reprint of the very first Mandrake story.

Personally, I think this new format might be an improvement over the current one (it reminds me in a way of how the Comics Journal has evolved during the past few years), and I'm looking forward to seeing it. Hopefully there will still be a place in today's marketplace for this magazine and the strips it contains.
Posted by Rodrigo Baeza at 5:31 PM 1 comment: