Scott Allie talks about his plans for the new Solomon Kane from Dark Horse. A bit that caught our attention:

Scott, let's talk story — what can you tell us about your plans for Solomon Kane?

I don't want to say the name of the first arc just yet, because lately every time we announce something with Conan or Buffy, some other publisher immediately tries to publish or register a trademark using that name.

Now who could he be referring to? (See botttom of entry.)

(For those too lazy to click: Dynamite Entertainment announced their own Savage Tales magazine, registering the trademark in their name, some time after Dark Horse announced its plans to do an anthology named Robert E. Howard's Savage Tales. We've previously mentioned Dynamite's current efforts to register the trademarks of several public domain Golden Age heroes.)

In other Robert E. Howard-related news, Michael Moorcock announced a month and a half ago that he's "supposed to be doing a Conan comic for Dark Horse."
Posted by Rodrigo Baeza at 12:00 PM No comments:

More information about the previous post can be found in an article posted today at icv2.com: the Will Eisner and PS Magazine book will be published by Hermes Press. Hermes Press has previously published books on Gil Kane and the Ross Andru/Mike Esposito team.

Other comics-related projects from Hermes Press, according to ICV2, are a Walt Kelly Career Retrospective (see a review of the recent Our Gang Volume 2 here) and The Unknown Carl Barks, focusing on Barks' animation work.
Posted by Rodrigo Baeza at 1:08 PM 1 comment:

Email ThisBlogThis!Share to TwitterShare to FacebookShare to Pinterest
Labels: Hermes Press, Will Eisner

Will Eisner and PS Magazine is the title of an upcoming book written by Paul Fitzgerald. According to Bob Aldeman, author of Will Eisner: A Spirited Life, Paul Fitzgerald is a "former PS editor and long-time friend" of Eisner.

"P*S" stands for Preventive Maintenance Monthly, the magazine for which Eisner provided (from 1951 up to the 1970's) illustrations and technical instructions (in comic-book form) on how to take care of military equipment and weapons. Eisner came up with the idea for this magazine, believing in the potential of the comics medium to communicate ideas and educate. This is from a somewhat controversial and perhaps underdocumented (in comparison to the time in which he was doing The Spirit, or his post-A Contract with God work) period in Eisner's career, so this book, written by someone who knew Eisner during that period, should make for interesting reading.

Fitzgerald has previously written a couple of appreciations of Eisner for the Washington Post (see here and here), the latter of which relates some Eisner anecdotes from the P*S period.

Further reading: Mike Ploog describes his time as an assistant to Eisner on P*S.
Posted by Rodrigo Baeza at 11:17 AM No comments:

Email ThisBlogThis!Share to TwitterShare to FacebookShare to Pinterest
Labels: biographies, Will Eisner 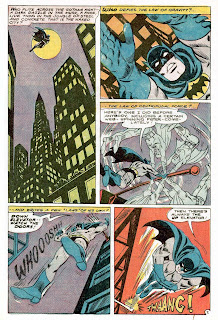 (Courtesy of Bob Haney, Ross Andru, and Mike Esposito. A reprint of this story can be found here.)
Posted by Rodrigo Baeza at 3:52 PM No comments:

As reported by the Forbidden Planet International blog, Diamond Galleries' Scoop has news about a collection of documents relating to the 1947 litigation for the ownership of Superman (between National Periodical Publications and the Jerry Siegel-Joe Shuster team) being offered for sale.

The three documents shown in the article are apparently only the tip of the iceberg, and as Tom Spurgeon says, hopefully the documents will be made available to historians at some point.

Among the documents we can see for now is a 1937 contract that states that all work done by the Siegel-Shuster team for their employer between December 4, 1937 and December 3, 1939 (at the rate of ten dollars per page) "shall become the sole and exclusive property of the Employer, and the Employer shall be deemed the sole creator thereof, the Employee acting entirely as the Employer's employee." The next clause states that Siegel and Shuster can't use of these creations somewhere else after they leave National Periodical Publications. While only "Slam Bradley" and "The Spy" are mentioned by name, the time period includes the first appearance of Superman in "Action Comics".

(Siegel and Shuster started working for Mayor Wheeler-Nicholson in 1935; one assumes that their earliest work, such as the "Dr. Occult" feature, wasn't initially covered by such a contract, unless they were later asked to retroactively sign their rights away, a not unlikely possibility.)

The last document shown in the article is a 1942 letter from Siegel to Jack Liebowitz. The reproduction is somewhat blurry, but as far as I can tell this is the entire text of the page shown:

I was very glad to hear from you. Your invitation to come on to New York to discuss the matter under correspondence was happily received as it will be nice seeing all of you again.

Bella and I expect to leave Monday from Cleveland. And so we should be seeing you Tuesday.

Regarding the matter mentioned in one of your earlier letters (regarding Lois finding out who SUPERMAN is because of reader demand) I feel that the interest of the readers in this subject is a very healthy angle, and we should endeavor by all means to keep them wanting to have Lois find out that Clark is really SUPERMAN. If Lois should ACTUALLY learn Clark's secret, the strip would lose about 75% of its appeal -- the human interest angle. I know that a formula can possibly prove monotonous thru repetition but I fear that if this element is removed from the story formula that makes up SUPERMAN, that the strip will lose a great part of its effectiveness.

This last paragraph is interesting given what we know about the unpublished "K-Metal" story that Siegel wrote in 1940, in which Lois does in fact learn Superman's secret identity. In the letter above Siegel argues in favor of maintaining the status quo (and would it be correct to deduce from this letter that Liebowitz was in favor of having Lois find out Superman's secret?), which suggests that he may have later changed his mind about the appropriateness of the "K-Metal" story.

There is some speculation that Siegel wanted to move the strip forward when he wrote the 1940 "K-Metal" story, and that we were denied the chance to see Superman (and the whole superhero genre) grow as the years passed (see Alex Ross' comments), but the letter above puts things in a different perspective. The "K-Metal" story can be seen as a "Wouldn't it be fun if..?" exercise caused by youthful enthusiasm, while the letter written two years later shows Siegel more preoccupied with the lasting power of the "Superman" feature.

In any case, the genie has been let out of the bottle as far as the current "Superman" feature is concerned, with not only the comics but even the movies showing us what Jerry Siegel would describe as a Superman with only 25% of his original appeal.
Posted by Rodrigo Baeza at 8:38 AM No comments: