Some years ago, I reviewed the second of Walt Kelly's Our Gang volumes published by Fantagraphics. Back then I'd noticed something strange in the second story reprinted in that book:

There's a strange transition between pages 44 and 45 of this edition: in the last panel of page 44 one sees the soldiers preparing to escape from their hideout, without knowing that they are being watched by the kids's friend, Captain Dan, who's holding a rifle. [...]

In the next page, we're in a completely different scene, with Froggy telling the other kids: "So I showed the cap'n how to aim it an' told him the exact pusychological [sic] time to fire an' -". The implication is clear (the Captain shot the Japanese while they were trying to escape), but the transition is a bit too sudden. The episode as reprinted in this volume is only 11 pages long, while the two previous episodes and the very next episode have 12 pages each. My first thought was that Fantagraphics may have accidentally skipped a page, but a likelier explanation could be that Kelly's editors decided to drop the page in which we see the Japanese soldiers being shot, figuring that such a thing might have been too strong for a children's comic, war or no war.

As it turns out, the simplest explanation was the correct one: this edition is missing a page that was included in the story's original appearance in Our Gang Comics #11. Since this issue was scanned some months ago, I'm able to include the original page (scanned from microfiche, so the quality isn't that good) here: 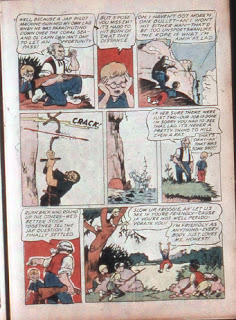 So there you have it, the original page in its uncensored glory. Hopefully this will be included in future printings of Fantagraphics's series.
Posted by Rodrigo Baeza at 4:59 PM No comments: