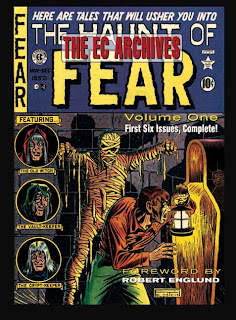 I first read about this over at The Collected Comics Library, but now there is an official press release. Russ Cochran and Grant Geissman will be continuing the series of EC Archives, reprinting entire runs of EC titles in chronological order, that was interrupted some time ago (apparently due to Steve Geppi's financial problems). The first two volumes will be Haunt of Fear Vol. 1 (reprinting the first six issues), and Vault of Horror Vol. 2 (reprinting issues 7 to 12). Presumably there will be enough of an audience for both these recolored reprints and the upcoming Fantagraphics series of artist-focused EC volumes in black-and-white. 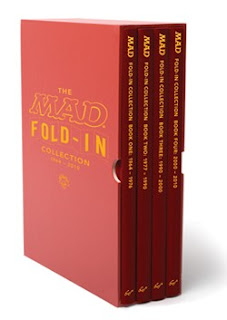 The MAD Fold-In Collection by Al Jaffee reprints in 4 volumes all of Jaffee's Fold-In pages from 1964 up to 2010 (found via Boing Boing). According to Chronicle Books' website, the collection will also include essays by Pete Docter, Jules Feiffer, Neil Genzlinger, and Jaffee himself. Looks like a nice addition to the previous Don Martin deluxe collection. (What other MAD artist would be a good candidate for one of these collections? I'm thinking a Wallace Wood volume could be quite welcome.)

Posted by Rodrigo Baeza at 11:01 AM No comments:

Not strictly comics, but too nice-looking not to share: artists Max (Bardin the Superrealist) and Hendrik Dorgathen (Space Dog) collaborate on this poster for the 2011 Neotokyo Festival: 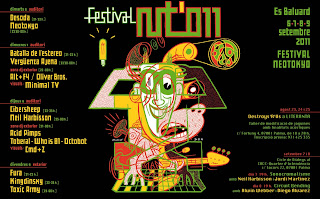 Posted by Rodrigo Baeza at 11:18 AM No comments: