Hugo Pratt: Will Gould was my real teacher

An interview with Hugo Pratt (originally published in 1988) was recently posted over at Ediciones de la Duendes's blog (part one, part two). The following exchange (translated from Spanish) caught my attention. Interviewer Germán Cáceres describes Pratt as a great artist in the comics medium, comparing him to Chester Gould.

HP: He narrated masterfully, but I prefer Will Gould, who has no relation to Dick Tracy's author. Will's line is more dynamic, in the thirties he launched the police comic strip Red Barry. Will Gould was the artist who had the most impact on me.

GC: I had supposed those [who had the greatest impact] were Noel Sickles and Milton Caniff. Will Gould's work isn't very well known.

HP: I admit Will Gould isn't a widespread comics artist, but he was my real teacher. Though of course Caniff with Terry and the Pirates had an influence on my style as well, and besides, I consider he's the greatest comic strip artist ever.


A Fantagraphics compilation from 1989 is still available, but the good news is that there are plans to do a more definitive edition of Will Gould's Red Barry. The first hint was a blog post from Dean Mullaney over at the Library of American Comics site, showing a Red Barry Sunday page waiting to be scanned: 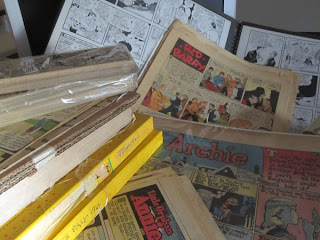 And Dean Mullaney confirmed it last month, posting the following:

We're gathering all the source material for Red Barry with plans to present the hard-to-find Sundays and dailies in a complete two-volume set. As soon as we locate the final elusive dailies, we'll put it on the schedule.

More of Hugo Pratt's work, by the way, can be seen at the Corto Maltumblr.
Posted by Rodrigo Baeza at 5:50 AM