Abhay Khosla had already predicted all this, but the way the announcement has been made is still interesting. 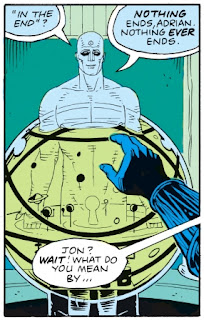 There is a lot of unintentional humor in the official announcement for a series of new Watchmen prequels: from trying to add some legimitacy to the initiative by mentioning that both the "original series editor" and the "original series colorist" will be working on them (we all know that DC always mentions the colorist when announcing a new series, they consider it a key selling point) to the solemn pronouncement from Lee and Didio that "collaborative storytelling is what keeps these fictional universes current and relevant". As opposed to, you know, coming up with new characters or concepts.

This is not surprising, it's the way DC and Marvel normally work after all. Think of the way Steve Gerber would react each time Marvel announced a new series featuring Howard the Duck or any other of his characters, and how little effect this would have on the readership (and industry) in general. In an interesting coincidence, Jonatham Lethem (about whom Gerber said at one point that he had made "an enemy for life" by deciding to write an Omega the Unknown series) is quoted in the New York Times as justifying these new Watchmen prequels, claiming they're the product of some sort of cosmic inevitability: "In the greater scheme of things there's an ecological law, almost, that it ought to be."

I'm aware that things are tough for freelancers (I probably have no idea of how hard a freelancer's life is), so I can't really blame the creators involved or lecture them about how they should manage their careers. But still, some of the justifications we're now seeing can be irritating.

J. Michael Straczynski pats himself in the back, saying that DC could have done something easy like having the Justice League fight the Justice Society, or the Justice Society fight the Teen Titans and so on (he forgot to mention "or creating a hardcover graphic novel with yet another retelling of Superman's origin"), but that this time instead they chose the "harder, and riskier path". I would have thought that the harder and riskier path was to create something new, come up with a new 100 Bullets or a new Preacher, for example.

Straczynski also tries to justify this by reminding us that Moore has done stories with characters created by Jules Verne, HG Wells, Robert Louis Stevenson, and so on, implying that this is surely the same thing as doing a Watchmen prequel. (He even says that Moore has lost "a little of the moral high ground".) Well, no. Moore's stories with those characters aren't simply pastiches or an attempt to do "The Further Adventures of Invisible Man / Captain Nemo / etc.". The stories he's created using those public domain characters are usually about something else, something much bigger in scope than just the crafting of pointless sequels and team-ups. You might argue whether Moore has been succesful or not in these attempts, but works like League of Extraordinary Gentlemen or Lost Girls are quite different from just a cynical moneygrab using somebody else's creations. But Straczysnki would have us believe that using the characters of writers who died before Alan Moore was even born is the very same thing as doing new Watchmen books.


The main thing is: a Watchmen prequel would be pointless even if Moore and Gibbons did it. I'm aware that at some point they'd talked about doing a "Minutemen" prequel which would have been something interesting to see back in 1988 or 1989, but not today. Watchmen stands on its own as a complete story, as a unique piece of work (despite the self-serving attempts by some to dismiss it as just a reboot of the Charlton superheroes), and it's also in some ways a period piece, a work very much of its time, written by someone who today is capable of doing much better and more complex work these days than what he did in the 1980's. I'll ignore these prequels not out of solidarity with Alan Moore or because I find them immoral, I'll ignore them because I think they're irrelevant, no matter who does them.

It will be fun to see how the media reaction progresses. In the meantime, I'll look forward to this summer's announcement of the new Sandman series without Neil Gaiman.
Posted by Rodrigo Baeza at 7:32 AM

One of the things that upset Steve Gerber about Lethem was the way he referred to the original Omega series as "this ashtray that somebody's twelve year old made in school" with the implication that he, Lethem, was rescuing it. How interesting that Straczynski strikes exactly the same note of inappropriate condescension and self-congratulation in explaining that another writer's expressly stated wishes just don't matter.

Once again, one more story that needs to be rescued from the heartless selfishness of its mere author and revived by someone else so it can bask safely in the protection of the media conglomerate that rightfully owns it.

JMS is a fine one to talk, of all people.

It's been two or three days since this announcement now - has he left the project yet, unfinished, blaming editorial interference preventing him from telling the story he wanted to tell, his way, in his own time, with the characters and backgrounds he doesn't own and didn't create but yet insists on having complete, absolute authorial creative control over...?

Usually takes him less than 12 issues to storm off in a huff citing that exact problem. Which is a shame, I actually liked his take on Thor, then it was all thrown away in an instant....