Here's a Jean Giraud / Moebius interview conducted in November 1977, and published in the first issue of Graphixus (1978) and later in Alter Ego #11 (1978). The accompanying text in the latter publication states that the interview was conducted by Mal Burns (publisher of Graphixus), Dominique Gaillard, and Mike Friedrich.

At the time of the interview, Metal Hurlant magazine was only a couple years old, the English-language version, Heavy Metal, was only a few months, and Moebius's first collaboration with Alejandro Jodorowsky, Les Yeux du Chat, had yet to appear.

The scans are from my copy of Graphixus: 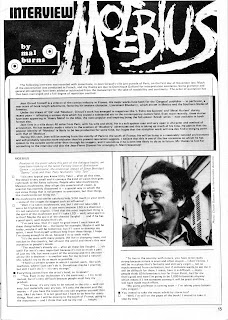 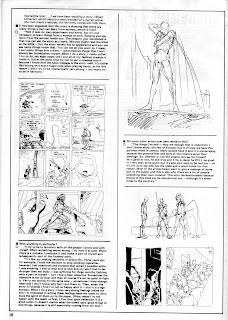 "I put many things into a story -- subconscious things that I can't always see immediately myself. When I do a story, I really suffer! I try to do, say eight pages and I put all my feelings towards it inside it, but at the same time try not to put a message into it because I know that the basic message is the story itself. It's rather like hitting that exact magic note when playing music, so for this reason I don't try to be intellectually very strong -- but more try to be in harmony." 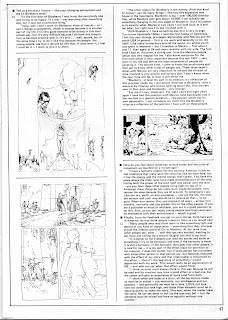 "I can actually see something changing in the new pages of Blueberry, but I'm unclear as to exactly what. Maybe in two years I will look back at it and see what, but right now I'm too involved with it."

(The date of the interview suggests that Giraud is talking here about Nez Cassé, the 18th Blueberry album, identified by Dave Gibbons as his favorite Moebius work: "perfect fusion of Giraud and Moebius.")


And here's a brief 1982 interview with Moebius about his work on Tron:

Also recommended: a 35-minute Moebius interview (with subtitles in English) found at Fascineshion.
Posted by Rodrigo Baeza at 5:30 PM