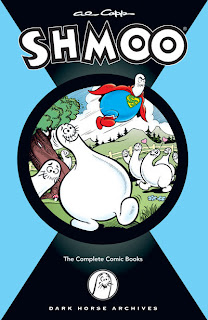 Finally, we have news of another comic strip-related project, this time the 5 issues of the Shmoo comic book, based on the character created by Al Capp in the Li'l Abner strip. Dark Horse has already done some Al Capp collections in the past (four volumes of Sundays done while Frank Frazetta worked as an assistant/ghost artist). While I've read those previous volumes (and most of the compilations published by Kitchen Sink), I know very little about these particular comic books. They're apparently credited to the "Al Capp Studio" rather than to Capp himself, probably indicating that this may be a diluted version of Capp's usual acerbic humor.
Posted by Rodrigo Baeza at 6:11 AM