His career began in the 1970's, doing witty but crudely-drawn cartoons for local magazines such as "Hortensia". His drawing would improve dramatically in the next few years, and his creations "Inodoro Pereyra" and "Boogie el Aceitoso" would become famous throughout the Spanish-speaking comics world. 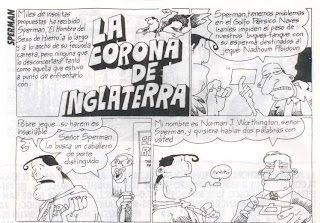 (Shown above: a sequence from one of his Sperman stories, a sexual superhero parody.)

Fontanarrosa was a voracious comics reader during his youth: he read Oesterheld, Hugo Pratt, Solano Lopez, Alberto Breccia, and many others, and he'd also praise series such as Roy Crane's "Buz Sawyer" (which he read in Argentinian reprints). Most of his work was humor-oriented, a large part of it done as gag panels, but he also did longer stories in which he showed his mastery of the comics form. (I remember being blown away by his collection "(Continuará)", a collection of comics shorts of different genres, not all of them humorous.)

"Boogie" in particular showed his dark humor, featuring a "Dirty Harry"-esque cold-blooded and very violent Vietnam vet and hitman. Fontanarrosa commented that the magazines that published this character would often receive congratulatory letters from male readers expressing their delight at finally seeing a character who knew how to treat women and black people correctly, without realizing that the series was supposed to be a parody.

Fontanarrosa was also a prolific novelist and short-story writer. His short stories (many of them about soccer, his passion) are highly praised, some of them having been adapted into popular theater plays in Argentina. I once read one of his novels, and found it exhausting in a way: the amount of (funny) jokes and wordplay per page was staggering, something I've never experienced with other books.

I had the chance to see him speak in public a few times: he could be tremendously funny and witty in public, capable of getting humor out of any situation, playing with logic and words intelligently and naturally, gently making fun of the people who asked him questions, but in a way in which everybody could get into the joke. I remember he was once asked if he ever felt that his characters wrote themselves. He said that that had never happened to him, and that he felt jealous of authors who could claim that: as soon as he stopped typing the characters would just stand there on the page, doing nothing and "standing like morons (boludos)" until he started typing again.

Fontanarrosa was suffering a strange degenerative disease in the past years, which had left him semi-paralyzed and uncapable of drawing. He was at his creative peak when the disease struck him, and it's sad to see him die so soon.
Posted by Rodrigo Baeza at 1:58 PM

Fontanarrosa's death has moved us all here in Rosario. El Negro was among the very, very few famous people in this country that didn't took off for Buenos Aires as soon as he became a celebrity. He stayed and could be spotted in his habitual places by anyone.

He had a crowded funeral parade today, and the city government ordered flags to be flown at half mast in his honour.