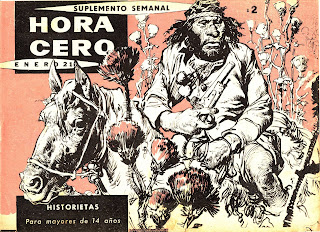 Throughout his long career, Roume worked for Argentinian, British, and French publishers, and was probably best known for his ability at drawing animals and for specializing in stories with rural, naturalistic settings.

I'm most familiar with his collaborations with Hector German Oesterheld on series such as "Nahuel Barros" and "Patria Vieja", but his career consisted of much more than that, as can be seen in the samples of his work posted over at the Chiquirritipis blog, at Domingos Isabelinho's blog (which includes an examination of Roume's "Nahuel Barros"), and in this gallery of his original artwork.

(Image above taken from Domingos Isabelinho's blog.)
Posted by Rodrigo Baeza at 6:51 AM

An exhibit of his works will be held on José Hernández Museum in Buenos Aires city from November 13, 2015 to March 6, 2016. It was named “Carlos Roume: lord of the horses”.
Martin Fierro drawings, oil and water paints, sculptures and comics will be shown

More information in this link: http://1drv.ms/1ZWCHGn